Army Ranger, Featured in the "Black Hawk Down" film 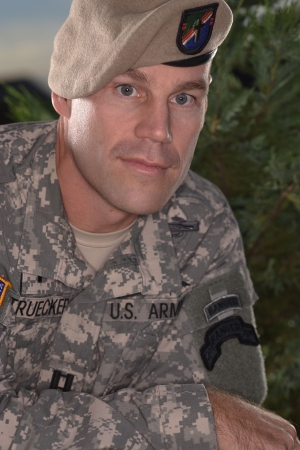 Jeff Struecker served with distinction as a Lead Ranger in the Black Hawk Down rescue mission in Mogadishu, Somalia, and was prominently featured in the book upon which the movie “Black Hawk Down” was based.

He served for ten years in the 75th Ranger Regiment. During this time, Struecker competed in the David L. Grange Best Ranger Competition for three consecutive years. His efforts culminated with a first place finish in 1996. He also served as an Assistant Instructor of Military Science at the University of Louisville and was recognized in 1998 as the US Army Reserve Officer Training Corps (ROTC) Noncommissioned Officer of the year.

Captain Struecker was born in Fort Dodge, Iowa. He entered the Army as an enlisted soldier in September 1987 and remained on active duty until April 2000 when he was commissioned as a Second Lieutenant in the US Army Reserve.

A man of courage and conviction, Jeff Struecker uses his personal story of survival on the battlefield to teach his listeners how they, too, can be prepared for any circumstances life has to offer.