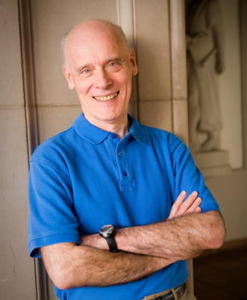 Hugh Ross launched his career at age seven when he went to the library to find out why stars are hot.  Physics and astronomy captured his curiosity and never let go.  At age seventeen he was the youngest person ever to serve as director of observations for Vancouver's Royal Astronomical Society.  With the help of a provincial scholarship and a National Research Council (NRC) of Canada fellowship, he completed his undergraduate degree in physics (University of British Columbia) and graduate degrees in astronomy (University of Toronto). The NRC also sent him to the United States for postdoctoral studies.  At Caltech he researched quasi-stellar objects, or "quasars," some of the most distant and ancient objects in the universe.

Not all of Hugh's discoveries had to do with astrophysics.  He observed with amazement the impact of describing for people the process by which he came to understand the true meaning of life.  He became convinced about the truth of the Bible and the reality of God, and was stunned to discover how many individuals believed or disbelieved without checking evidence.

Hugh communicates a message that's clear and understandable.  He scouts the frontiers of origins research to share with scientists and nonscientists alike the thrilling news of what's being discovered and how it connects with the biblical record.

Between writing books and articles, he travels around the world challenging high schools, university audiences, and professional groups to consider the evidence for what they believe.  He presents a persuasive case without applying pressure.  Because he treats people's questions and comments with respect, he is in great demand as a speaker and as a radio and television guest.