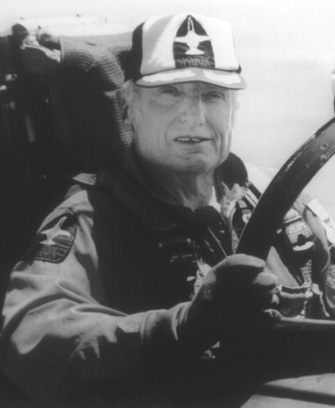 Russell is an internationally known test pilot and aircraft designer. After serving in the U.S. Air Force, he joined Douglas Aircraft Company in 1956 and became their far eastern representative on a classified Reconnaissance Jet Bomber program based in Japan. In 1965 he left Douglas to establish the first civilian flight test company in the U. S. He acquired the first civilian-owned fleet of jet fighters and converted them to high performance test beds to provide flight test programs for the nation’s aerospace industry and the Department of Defense.

In 1969, the U.S. State Department called on him to develop and head the U.S. food airlift to Biafra during the Civil War in Nigeria. Utilizing four giant Boeing C-97 Stratofreighter aircraft on loan from the USAF, he and his crews flew more than 1,000 relief missions under combat conditions to the surrounded Biafran’s during the one year the conflict lasted.

In 1972, the State Department asked him to perform a similar program in Bangladesh. He and his staff conducted a major airlift of food and relief supplies to the remote areas of Bangladesh that had been devastated by a civil war and a massive typhoon.

More recently, he has designed and developed a new concept tactical jet fighter, and has demonstrated the prototype of this aircraft to the US military.

In 1984, Life Magazine selected and featured him, along with his jet fighter, as one of the top five test pilots in the United States. He has been a guest on the “Today Show” and many other network television programs. A thirty minute television special entitled “Skyfox”, pertaining to his background and the jet fighter program, has aired nationally on the PBS network.

Russell O'Quinn, one of The Gathering's favorite speakers, died this past April 22, 2022 at the age of 93. We will miss Russell, and look forward to seeing him again in the presence of Jesus.